Thunder Bay has the largest Finnish population outside the homeland, so it should come as no surprise that saunas are important to them, being Scandinavian. 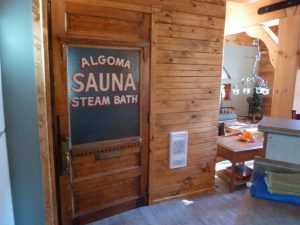 In 1979 controversy arose over the potential demolition of a historic large steam bath building.   As a university student at the time I got wind of this, and after a heated (no pun?) decision by the city to tear it down, I went and bought from the contractor for $20.00, the front door.   I even got the key.  It was an ugly pink, like the rest of this rambling wooden structure.
It became a decorative element in our eclectic student rental unit.  Since, the door was restored and used in different roles such as an office door, and here it is at Lighthouse Chalets.